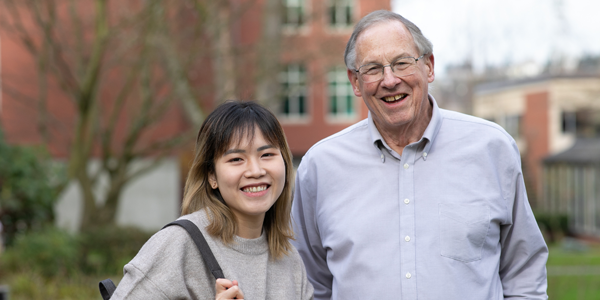 As a volunteer English teacher in China, Jay Morgensen '68 saw firsthand how education could change a life. The newly retired Oregonian was sharing his English skills with middle and high schoolers in a rural town west of Beijing. He made annual, monthlong trips from 2000 to 2006 to help – the first American many of the students had ever met.

He quickly observed that most of the girls sat in front, asked thoughtful questions, studied, and paid attention more than the boys. But they were treated unequally.

One student, Wei, always asked "Mr. Jay" about English and about life in the United States. One day, she invited him to her home to meet her family and share a meal.

"The village was very poor," Jay said. "She said the last person to graduate from high school was from her father's class. I asked her about college, but she was an average student (like me!) so she could not afford college."

Jay learned the cost of tuition. "I talked to her teachers to see what they thought if I paid for her college," he said, and they affirmed the idea. "I thought, "I can't change

everything, but I can for one person.'"

He stayed in touch with Wei, who finished college in 2007. "She said that [getting an education] changed her whole life," he said. "Now her parents listen to her when she has something to say." Today, Wei teaches at the school where she and Jay met.

Years later, Jay's classroom observations were echoed in Nicholas Kristof and Sheryl WuDunn's book, Half The Sky, about the oppression of women and girls in the developing world and how just a little help can transform lives. "What I thought I saw in China was true," said Jay after hearing Kristof speak.

He decided to fund a scholarship endowment at his alma mater to provide tuition assistance for female undergraduates currently or recently from China or Southeast Asia. Jay's first scholarship was awarded in 2014; 13 students have been awarded his eponymous scholarship so far.

Jay takes special pride in getting to know "his" students a bit and giving each a copy of Half The Sky. "Meeting and visiting with the scholarship recipients has been very rewarding. I like to meet with them because I'm invested in them," he said. "If you buy stock in a company, you want to know how the company is doing.

"Even though my scholarship is not a huge amount, I know every little bit helps. I want to see that it's going to people who deserve it – and I've been very impressed by every student. Every one of them has been exceptional in academics and SPU activities," he said.

Jay scrutinizes the nonprofits he supports. "I give to organizations that I feel provide a service and don't spend a lot on administration or fundraising," he said. "I've always supported SPU. Establishing the endowment offered me a permanent way to support the University and its students." In addition, Jay has included a gift to his endowment in his estate plans.

Growing up in Coos Bay, Oregon, Jay had never heard of Seattle Pacific College until a chance encounter. In his senior year of high school, he worked for the Oregon Legislature in Salem and ate many meals at a nearby lunch counter. "I noticed one of the waitresses was nice to everyone," he said. "She mentioned that she went to Seattle Pacific College, and I thought if everyone there is pleasant like her, it's a place I would like to attend. A few years later, I was there."

Jay worked at a Seattle bank in his college years to support himself. Money was tight back home, so he understands the financial pressures today's students face. Working and studying left him with little time, but he became good friends with several classmates that he still sees. Three of these fellow Falcons and lifelong friends followed Jay's example and established their own scholarship endowments.

Together, Jay and his friends are changing lives, one student at a time. "It is great to see that my scholarship is going to the right students," he said. "I remember all of the students who have received the scholarship. They all stand out."